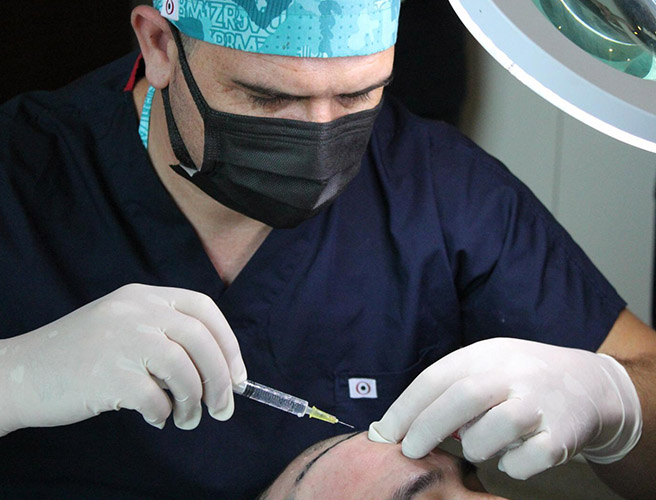 DHI is a method in which the roots taken from the donor with manual punches or micromotors are directly transplanted using special pens for the patient who is administered local anesthesia, after the decision is made that the patient is suitable for hair transplantation. In DHI Pen Technique, pen-like apparatus is used. The diameters of the needles at the tip of the pens vary according to the characteristics of the donor area hair, whether it is thin or thick. Pens are available in various sizes from 0.6 to 1.1 diameters.

In the DHI Pen Technique, the maximum number of roots (grafts) transplanted in a single session depends on the expertise and experience of the team. When the DHI Pen Technique was first introduced, a maximum of 2000 grafts could be transplanted in a single session. Today, with the development of technology, more grafts can be planted. In the "modified" DHI Technique developed by Dr Kinyas, your hair transplantation is performed by a team of five people, including a doctor on the right and a doctor on the left, with at least three assistant health workers who do pencil alignment. Thus, it has become possible to plant up to 6000 grafts in a single session. In the DHI Pen Technique, planting with maximum root takes about six hours in one session. Since the waiting period of the roots in the external environment is shortened, the chances of the roots to survive increase. Therefore, the patient's hair transplant procedure is painless and comfortable.

DHI CHOI Pen Technique can be applied to patients of all ages who suffer from hair loss.

Who is suitible for the DHI CHOI Pen Technique?

With the DHI CHOI Pen Technique, it is possible to have a shaved or unshaven hair transplant in large or local areas with permanent hair loss problem or irreversible hair loss for any reason, to patients of all ages and genders.

What are the advantages of the DHI CHOI Method?

Since the roots are made using pen implanters in hair transplantation, it has become possible to give the desired angle and direction to the transplanted roots. Therefore, hair growth has become natural. In this way, patients can direct their hair as they wish.

In the DHI CHOI Pen Technique, there is a chance of planting 80 to 100 roots in 1 cm2 area in the presence of sufficient grafts.

In FUE and FUT techniques, excessive bleeding while opening the canal during the hair transplantation process can cause the patient to experience blood pressure imbalance after the operation. In the DHI Pen Technique, bleeding is much less.

In FUE and FUT techniques, since the tissue is cut while the canal is opened, free nerve endings are damaged and redness in the tissue occurs due to the cut. In the DHI Pen Technique, numbness and redness are seen at a much lower level.

It has become possible to have denser hair with unshaven hair transplantation in people with long hair.

Compared to other existing hair transplantation techniques, the disadvantage of the DHI CHOI technique is negligible. The primary disadvantage is the low number of living roots per 1 cm2 compared to normal human hair. Therefore, there are physiological disadvantages that allow the roots to be fed.

Ecem Hn.
Ecem Hn.
Thanks for contacting Dr.Kinyas! How can we help you?
22:06:05
Start the Conversation
Whatsapp Contact us
COOKIE NOTICE We use cookies on our site to improve your experience. For detailed information, you can visit the cookies page.